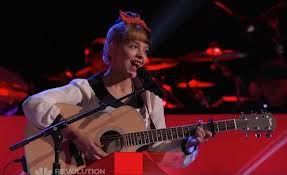 The team count goes something like this: Adam and Blake both have five singers after one week of competition, Cee-Lo has four and Christina leads the pack in both usage of glittery eyeshadow and the teams with seven singers on-board Team XTina. This prompts me to wish that more people used x's in front of their names to shorten them.

Blake shows up to the set with his ACM Award for Male Vocalist of the Year in his back pocket. No… literally. He hopes it'll help him score some of the better acts on his team. And, while Blake has an ACM, Cee-Lo has a really creepy bird that he carries around on his shoulder, making him look a little like Dr. Evil.

Carson shows us his deep side when he talks with the first contestant, a 17-year-old photographer who shows off a photo superimposed to look like the subject has butterflies in her stomach. "It's almost like… butterflies in your stomach," he sagely notes. Uh, yeah, thanks for that. The singer ends up being a total surprise, belting out a quirky, indie version of Britney Spears' "Toxic" and landing a spot on Adam's team after getting Adam, Blake and Cee-Lo to turn around.

As the night wears on, we start to see that it's boys versus girls, with Cee-Lo, Adam and Blake turning around for acts while Christina stays put. Which is silly, because if I had a chair that spun around on cue, I'd probably use it as often as possible.

One of the most heartbreaking performances of the night is by Cupid. He's the singer of the one-hit wonder "The Cupid Shuffle" and sings that exact song to zero acclaim. Why, if you were a one-hit wonder, would you go ahead and sing that one hit again? I don't get it. And he's not the only past pro to show up on the stage. One singer (Gina) who had two past record deals took the stage looking like Pocahontas Barbie and oversang "Turn the Beat Around," not getting any nibbles.

The real homerun of the night, sadly didn't come from the baseball player who used sports metaphors to describe his goals, but from the last singer, 16-year-old Avery. He sings Usher's "Without You" like it was made of butter and gets all four chairs to swing around. With all of the judges fighting over him, he surprisingly chooses Cee-Lo to coach him and closes out the night.

With the coaches' teams becoming close to capacity, they're starting to get more choosy about who will make their teams and more feisty about the coach-on-coach battles to get the singers they want. Of course, that also means we get to see more huge flops on the big red stage.

I thought that the sadder the back story, the more likely a singer was to get those chairs to turn around, but the first singer of the night – a single mom – proves my theory wrong.  Her Whitney rendition wasn't good enough to get anyone to turn around, and she leaves sobbing, despite her sob story. Luckily, the next contestant fares better, getting all of the men to sit up and take notice; grad school dropout Colin goes with Adam, which makes total sense.

In the heart-clinching moment of the night, 17-year-old Joselyn admits that after she was born prematurely and lacked regular social skills as a child, she was actually "prescribed music" in order to get better. Come on; you know that a girl whose life was saved by singing is going to make it through. She does, thanks to Christina's button-pushing skills. Blake chimes in too but it's clear who she'll pick: Team XTina all the way! Sorry, team XBlake.

The gold star of the night definitely goes to Mycle, who is an orphan after his parents both passed away. He was raised by his grandparents. When he sings "Let's Stay Together," he has the kind of voce that I want to hear on every Christmas album ever. He gets the male judges to all fight for his place on their teams, but ends up with Team Cee-Lo, leaving Blake singer-less for the night.

By the end of week two, Team Cee-Lo features 11 singers, Adam is sitting pretty with 11 singers, XTina is killing it with 10, with Blake pulling up the rear with just seven singers. That means the teams are just over half full and we're well on our way to the actual competition between the coaches. On the bright side, it also means that the change in taping schedules means we'll finally get to see Christina in something other than that gold blazer and booty shorts combo. I don't know what I'm more excited for.