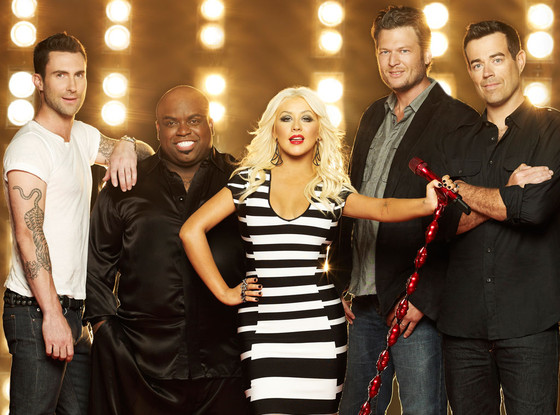 Hand up if you're excited for something other than the Battle Rounds? After a few weeks of seeing the back stories, the rehearsals and all the rest of the drama, I'm excited that we get to see what "The Voice" is really about: Raw favoritism. Because you know that the coaches pit the best against the worst to weed out their favorite singers. And, since all of the steals have been filled, the singers that don't survive are being sent packing.

After a ton of talk, Team Adam gets to have his turn at making a pairing for the first Knockout Round of the season. He goes with Jocelyn and pairs her with Kayla. He wants to see which of the pop singers will make enough of a risk to go to the live shows. Jocelyn goes with a Beyonce song, while Kayla plans to sing "Shark in the Water." During the performances, Jocelyn does "Love on Top" justice, proving that she's more than a one trick pony while Kayla looks on nervously. Kayla  sounds a little shaky during her performance, which is probably why Adam puts Jocelyn through to the live shows. Poor Kayla's the one who told Adam "We better win this" when he picked her. Well, this is awkward.

The next matchup is between Joe and Bryan. Adam thinks that they both have distinct styles that'll make them an interesting pairing. Joe goes with "Mean" by Taylor Swift, which is kind of weird. Adam is resistant but lets him give it a shot. Bryan is going with "Everything I Do, I Do it For You" because apparently, this is 1993. Now I'm hoping that Joe wins solely on that basis. During the performance, the weird choice actually pays off for Joe, since he does a cool rock version of the track. Bryan kicks it old school and delivers exactly the performance you'd expect, complete with cheesy hand motions. Adam chooses Bryan anyway and I yell "Boo!" out loud.

Another awesome matchup is between Melanie and Sam, the two indies left on Adam's team. Melanie goes with "Bulletproof" and Adam calls her rehearsal a little underwhelming. Sam goes with "Walking in Memphis," which is one of the songs that everyone knows without actually actively listening to it. Adam doesn't like the way he pronounces certain words, so both singers have issues. During the performance, Melanie does her usually ingénue thing that she does with acoustic accompaniment only. It's good, but without any huge breakthrough moments.  Sam nails his song with his gritty voice and manages not to butcher all of the words. Adam puts Melanie through.

When CeeLo's turn comes up to start pruning singers, he goes with Avery and Cody. I will eat my hat if Avery doesn't dominate Cody. Please don't make me eat my hat, CeeLo. Avery is singing "Yeah 3X" and busting out some choreography, much to CeeLo's chagrin. Cody decides to sing "Jolene," which is a bit odd. I'm just glad he doesn't have to sing Lady Gaga again. During the Knockout Round, it's not one of Avery's best, probably because he spends more time bouncing around the stage than singing. Cody's song is surprisingly good – weird, but good. CeeLo ends up choosing Cody. Wow, this hat is delicious.

I'll refrain from making any predictions about Mackenzie versus Daniel; I really would rather not eat any other items of clothing. Mackenzie decides to sing "Call Me Maybe," the second Carly Rae Jepson song he's belted out on stage. Daniel decides to sing "Back to December." What is with these guys singing female pop songs? I'd like it if the girls started singing male grunge rock anthems in the future. During the performance, Mackenzie's rendition is more indie and quirky and doesn't sound much like the actual summer jam. Daniel's crack at Taylor Swift is quiet and sweet, but he misses some chances to really show off. In the end, it's Mackenzie who makes it to the live shows.

One of the best pairings of the night is when CeeLo pits Mycle against Nicholas, who is obviously a coach favorite. But, since they both have soul singing down to a science, it makes sense. Nicholas wants to show some of his range with "Put Your Records On" while Mycle goes with "Don't Let the Sun Go Down on Me." As expected, Mycle gives a solid performance with his breathy, gritty voice. Of course, Nicholas does his hippie soul thing and sounds smooth during the actual Knockout Round, so it's up to CeeLo to break one of the resident dad's hearts.  As expected, CeeLo goes with Nicholas.

During Christina's time to shine, she puts Devyn with Laura, two huge voices with major star quality. During the rehearsal, Devyn decides to sing "I Have Nothing," which is pretty ambitious, while Christina watches with her candy-coated hair. Laura goes with "I Need to Know" to help show off her "Latina-ness," which is my new favorite word ever. During the performances, it's Devyn who really nails the difficult Whitney Houston song, whereas Laura's performance is more fun than anything. After some serious deliberation, Christina goes with Devyn.

Her next matchup is between Adriana and Celica as powerful pop singers. To be fair, literally everyone on XTina's team is a powerful pop singer. Adriana wants to sing "Already Gone" as a huge ballad, but Christina wants her to pick up her own melody and does a little showing off of her own. Celica is singing "Never Say Never," which is a Bieber song. It pales in comparison to Adriana's soulful song, but XTina coaches her on her swagger. On stage, Adriana takes the advice and mixes up the last part but makes some seriously weird facial expressions. As expected, Celica's Bieber fever is more of a low-grade temperature. Christina makes the right choice with Adriana.

I've been dying to see more from Lady Gaga's protégé, so I'm happy to see the matchup between Chevonne and De'Borah. Chevonne is singing "Dancing with Myself" which might not be the most challenging song ever, but her kookiness can handle it. De'Borah is keeping up with her usual oddness and singing "You Found Me," which is outside her usual song choices. Chevonne's performance isn’t anything to write home about, but it's probably because it's a song without range. De'Borah's song is more along the lines of touching and soulful. When push comes to shove, it's De'Borah's performance that pushes her to the live rounds.

It's finally Blake's turn, and he starts off strong with a matchup between country singers Liz and Gracia. Gracia tackles the song "I Don't Wanna Miss a Thing," which isn't much of a country song. Blake has some reservations that she's veering off-course. Liz takes on yet another Miranda Lambert song "Gunpowder and Lead." I think she's just trying to curry favor with Blake's wife. In the ring, Gracia's performance is pretty common and doesn't have a lot of standout moments. Liz does her usual powerhouse thing and gets her sass on at the same time. Blake decides to takes his Lambert-lover and puts Liz through to the next round.

Collin and Michaela are up next – what are they even doing on Team Blake? Neither are the usual country singers. Just the same, Collin goes with "Breakeven," which is a natural choice for his smooth voice. In related news, I find him to be adorable. Michaela's song is "Love is a Battlefield," of course. She has a Mohawk for goodness sakes. When they hit the stage, Collin's song sounds like something that you'd hear on the radio, making him seem like a seasoned vet. Michaela's Pat Benetar impression is definitely powerful and she does her punk rock thing. Of course, only one can make it through and it's Michaela who makes it through to the live show.

Stephanie writes on behalf of CableTV.com. She typically writes about entertainment and technology. When she’s not writing, she’s an avid runner. You can follow her on Twitter @CableTV.