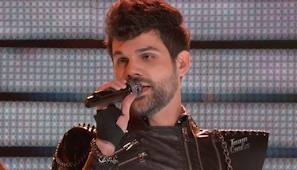 It seemed like a mere week ago, there were two of three clear frontrunners for the entire competition, who enjoyed all of the praise and a ton of confidence to actually stick around. This week, that pecking order was completely threatened, thanks to the power vocals of Cassadee Pope. But I could be getting ahead of myself here.

Monday night kicked off with the intro of three guest coaches that helped out along with the regular coaches during the week. Ron Fair, Jennifer Hudson and Soctt Hendricks all pitched in to make sure that the top 10 was completely worthy of the label.

Alicia in the house

Sylvia started off the show with a rendition of Alicia Keys' "Girl on Fire." Let's face it: Alicia Keys is always risky because her range is insane. But I think that Sylvia did a stellar job and knew just when to belt out the huge notes. When she was finished, the crowd was pumped and Christina loved the way that Sylvia was constantly changing things. Right before the song, Sylvia admits that she was studying to be a lawyer and decided to follow a singing career instead; so the show is getting a lot more personal.

Team Blake's Terry McDermott is the next to perform. How surprised would you be if I said he sang a country song? Pretty surprised – the dude only sings rock. Instead, he sings "Summer of '69" and did just as well as you'd expect. He's solid as a rock, although I find him to be a bit boring with his song choices – sorry Terry! Adam is still sad that he didn't pick up Terry and Blake is sitting pretty. Unfortunately, I don't think he'll win.

Our resident indie rocker Melanie sings next. When I saw that she'd be singing "Seven Nation Army" I was very confused – doesn't sound like her usual tortured performance. She does a guitar-based rendition and threw her spin on it and while I tend to find her performances a little showy and inauthentic, she nailed it. Adam didn't want her to do the song in rehearsals and he had to eat his words when she delivered a killer performance.

Oh, Cody Belew. How can you not love that guy? While I’m obsessed with his diva personality and take-no-prisoners style, I don't know what he was thinking by singing "Crazy in Love." Anyone who's ever been to a drunken karaoke night has done that song and boozy karaoke is exactly what the song came off like. Still, I can't fault the guy for trying. After all, what other male competitor would even try to touch Beyonce?

New Yorker Bryan Keith decides to give his hometown props by singing "New York State of Mind." It was good, but I've never been blown away by anything he's done. I just feel like we already have a Bruno Mars-type. Just the same, XTina likes the performance, even if I yawned through it.

Amanda Brown is still bringing it home. She sings "Stars" and it blows last week's lackluster performance completely out of the water. When she sings, you can tell the difference between a professional and someone who just happens to have a good voice. She has major control and knows how to use the stage. If she doesn't make it till the final two or three, I'll be shocked.

Chicken Soup for the Soul

Nicholas David is still hanging on and he actually plays the piano this time around as he belts out "Lean on Me." It's such a Nicholas David song that it seems like he almost wrote and performed it originally. He's another winner for the show – even if he doesn't win, I imagine he'll end up with his own career and contract. My favorite comment of the night is when Christina says that listening to Nicholas is like "legendary chicken soup going down nice and easy" for her soul. Remind me to use that metaphor as often as possible.

Everyone's favorite, Trevin Hunt, takes a break from his usual R&B fare to bring you Usher's "Scream." He is, after all, only 18-years-old. Unfortunately, the song doesn't give him the range that he usually gets so the performance falls a bit flat. Not enough to put him in jeopardy, but enough to raise a few eyebrows. It sounds like he'll be going back to ballads after this.

Cassadee Pope sings "Over You," by Miranda Lambert, Blake's wife. Sucking up a little to the judges, maybe? She manages to throw a ton of feeling and emotion into the track and her voice sounds like butter. Shoot, I should have said "chicken soup." Regardless of what food her voice reminds you of, she's another dark horse of the competition and holding her own after a shaky start.

The last artist to give it a shot is Dez, screaming girl favorite. Unfortunately, he has the unenviable task of coming after Cassadee, but he doesn't let it shake him. Instead, he sings "Feeling Good" and shows off his jazzy side. Hey – isn't that Cody's job? His voice sounds good and he looks good, so I think he's safe for another week, even if it wasn't anything earth-shattering.

And The Saved Are…

After the usual fanfare during the second night, it's finally time to find out who's safe and who's going home as the final eight are announced. Cassadee, Melanie, Nicholas, Trevin, Dez, Amanda, Cody and Terry all make it through, leaving Sylvia and Bryan as the night's losers. I'm actually surprised about Sylvia, because I think she did a good job. I'm not surprised about Bryan, but that could be because of his penchant for songs from the '90s.

It's another night of competition on the books and I can appreciate the pure nature of the proceedings of "The Voice." Sure, it's gimmicky at the start, but as the completion progresses, it gets more serious. Now, if someone could just tell Cody that he's not Beyonce, we'd be all set.