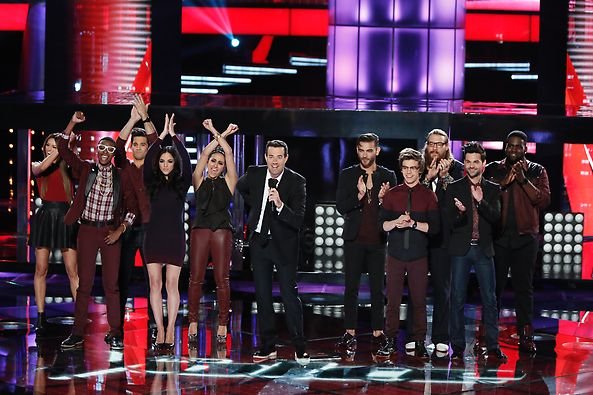 The Voice Season 3 Week 9: The Playoffs It's here, it's here, it's here! No, not Election Week; I mean the Playoff Rounds of "The Voice." I mean, let's face it, deciding the next President of the United States is great and all, but what about the fine singers that will it through to the next rounds? As a quick reminder, in the Playoff Rounds, only three singers from each team will make it through. America gets to vote and pick the first two singers and the coaches themselves will be in charge of saving the last singer to eek through. Oh yeah, tension is high.

Team XTina and Team CeeLo are the first up to sing during the first night of Playoffs. They kick it off with XTina's pop powerhouse, Adriana Louise. She's been XTina's pet through the last few rounds, but when she tries to bust out Katy Perry's "Firework," the performance falls a little flat. After all, that is a seriously hard song to sing and Adriana gets a little ambitious with a few crazy runs. Luckily, Christina tells her that she's really "sweet." Because, you know, this is a personality competition.

De'Borah is still going strong when she chooses Pink's "Who Knew" track for her individual performance. And maybe it's just that all of Team XTina has some nerves to deal with, because even the uber-confident De'Borah has a rough start. However, her pluckiness more than makes up for her missteps and by the end, she has the audience on its feet. Of course she gets tons of positive feedback and Christina does everything she can to convince America to vote De'Borah through.

Heartthrob Dez takes the stage with Hunter Hayes' "Wanted," a song that Christina chose because she wants to show America that Dez is no one trick pony. Of course, if you've been in an American Eagle store lately, you'll notice that not only is he a singer, but a model as well. But that's beside the point. He actually does a passable job with the song, despite the fact that it's outside his comfort zone. And even if he tanked horribly, the girls in the audience would make up for it with sheer screaming and fainting.

On the CeeLo side of things, Cody is still hanging in there and decides to put his "old black lady" persona to the test when CeeLo suggests he sings a George Michael track. After singing "One More Try," it's like a light clicks on in the collective heads of all of the judges. While Cody was just scraping by before, he's now a coach favorite and it looks like he might hang on for another round. Even if America doesn't love him, he might be able to get CeeLo to put him through with the pity vote.

In "complete predictable news" Mackenzie Bourg is asked to sing "That's What Makes You Beautiful" by One Direction. Can I just sigh heavily now? While I think Mackenzie is adorable and I respect his whole back story, but I'm pretty sure the boy singer genre is all filed up with The Wanted, One Direction and Justin Beiber at the moment. All the coaches seem to like it, but XTina wishes he would switch things up a little; you and me both, sister.

Of course, I can't not mention the show's golden boy, Trevin. He has been completely primed for the win from day one, so it's no shocker that when he sings "How Am I Supposed to Live Without You," the judges are lapping it up. To be fair, the kid has a seriously amazing voice and he takes on the song like an old pro. If he doesn't make it to the top 12, you'll have to pick my jaw up off of the floor.

Adam vs Blake- It's a Bromance

After a brief pause for election night, "The Voice" comes back with Team Adam and Team Blake. The first singer of the night is Jocelyn. Adam has kept her around as his go-to pop singer, but her rendition of Demi Lovato's "Give Your Heart a Break" is a bit shakier than her usual powerhouse performance. Still, the coaches all seem to be digging what she's singing so she gets positive reviews back and leaves the stage smiling.

When it's Melanie's turn to take the stage, Adam says – in an interview – that he thinks she's at the top of the pack and might just win it all. Can we have a moment of honest truth, here? Melanie is super adorable and I even get her whole indie teen thing she has going on, but I have a hard time imagining people going out and buying an entire CD dedicated to her Minnie Mouse-ness. She chooses "Hit the Road Jack," and actually does OK, but she only does really well when she can choose her own songs, which she's obviously spent a lot of time reworking. The coaches all give kudos, except for XTina who tells Melanie to watch out for more than just her artiness.

Bryan Keith, who is still hanging on for dear life, decides to sing the Goo Goo Dolls "Iris." After last week's "I Don't Wanna Miss a Thing," I am led to believe that he is choosing all of his songs solely from a "Songs that Were Played at a 1999 School Dance" playlist. He does OK, but I stand by my position that he won't be the winner. While he has a good voice, it's nothing new and there are others who are doing more inventive things with their songs.

When it's Team Blake's turn, Liz Davis – who I'll admit that I love – went for the risky move and wore a long dress. After all, her stems are her real claim to fame, but her voice isn't too shabby either. She belts out "Independence Day" and does her country coach proud with her Martina rendition. If she doesn't make it close to the end, I'll be super surprised.

The big winner of the night would probably have to be Julio Cesar Castillo. Besides the fact that he hasn't chosen the pretentious route and used his middle name as his last name – ahem, "Bryan Keith" – but he sticks to his roots. He sings "El Ray" and does his whole adorable mariachi thing. XTina looks like she wants to keep him for herself and after the song; the audience hops on its feet and gives him a standing ovation. And honestly, I think that music could use another solid Latino singer – I know I'm as tired of Marc Anthony as J-Lo.

The Election Votes Are In It's a seriously bloated results show, but what can you expect after four hours of Playoffs? CeeLo's team is the first on the chopping block and it's absolutely no surprise that Trevyn has been voted through by the fans. Another winner from Team CeeLo is Nicholas David, the soulful – if fashion challenged – dad. So, with those two through, CeeLo gets to pull rank and finally decides to send Cody through. CeeLo now has a strong all-male team going forward.

Adam's team is next to get the results. Amanda Brown is the first to get the news that America has voted her through to the next round. It's not surprising, since she's long been one of the frontrunners, despite a weak audition. Remember that she was cut by CeeLo only to be saved by Adam. The fans also voted through Bryan Keith – maybe next week he'll sing something from this century? With his save, Adam chooses Melanie to go through. I hate to say it, but without Amanda, Adam's team seems kinda weak.

When it comes to Team Blake, America decides to put rocker Terry through and he is nothing if not completely grateful. Another winner to go through is Cassadee. Blake has the chance to make a save and I'm totally gutted when he chooses rocker teen Michaela over country cutie Liz. After all, Blake is a country singer and he and Liz seemed to get along. I'm not loving Blake's final three either.

Christina's strategy to create a strong pop-based team seems to work out in her favor. It's obvious that the ladies love Dez, so it's a no-brainer when he gets the word he's going through. Silvia also sails through, leaving XTina to save someone for her team. She goes with Adriana, which means her long-time connection with De'Borah is donezo.

So what can we see with the judges going forward? It's clear that both America and the coaches are favoring younger singers this year, cutting some of the older, more experienced singers (ahem, Liz Davis) for a later birth date. But honestly, I think it'll all come down to Amanda and Trevin – who's in for a rematch?