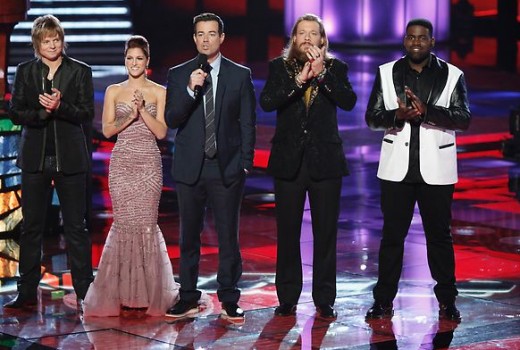 It was the top six who had their time to shine on the 13th week of “The Voice,” whittling down their numbers to just four lucky singers who are capturing America’s hearts – and their text messages. Each contestant got to sing two songs to fill out the two hours of TV and some soared, while others fell flat.

CeeLo was sick and didn’t get to work with his singers, so they brought in the lead singer of Train to do the honors instead. Still, CeeLo got on the phone with his singers and coached them that way. And don’t forget, Christina’s out of the competition, so she’ll be watching from the wings and offering her critique.

Nicholas David got to sing “September,” which is a little upbeat for him and a bit of a surprise. However, Pat – the lead singer of Train – wants Nicholas to take some risks and show off his range. He kills it on stage and the other judges agree that they were all stupid to not snap him up when they had the chance. He also sings “Somewhere Over the Rainbow.” As a watcher, I’m sick to death of “Somewhere Over the Rainbow” being sung on every singing competition ever, but Nicholas David manages to make it sweet by saying that it’s his mama’s favorite tune. Everyone loves it and it looks like Nicholas might be safe for another week.

Trevin Hunte is also on Team CeeLo, making it the strongest in the competition. The first song he sings is “Walking on Sunshine.” Um, what? It’s so far out of his comfort zone that he’s hesitant about taking it on, but he sounds completely natural on stage. Even Adam says that he loves the rendition and Trevin’s spin. His second song choice is “And I Am Telling You I’m Not Going” which makes sense because to me, he’s like a male version of Jennifer Hudson anyway. It’s a huge song that can go very, very bad, but Trevin does so well that XTina basically offers him a place on her tour.

Blake’s team gets a shot at showing up Team CeeLo by sending Cassadee Pope out on stage to sing “Stand” by Rascal Flatts. She’s a little unsure of the country pick, because she usually sings more singer/songwriter stuff, but her performance sounds dead-on. However, Adam wishes he could see more range – more than country? Her second song is “I’m With You,” which is obviously right up her alley. She has her “wow” moment and all of the judges fawn over her. I don’t know if it’s enough to keep her around, but it’s enough to boost her confidence.

Terry McDermott also sings for Team Blake and starts out with Foreigner. “I Wanna Know What Love Is” can be a really bad karaoke song, but Terry talks about how it reminds him of the loss of his mother and the strength of his wife, so you know it’s gonna be good. Both Blake and Christina give his efforts a standing ovation. His second song is “Stay with Me” my Rod Stewart, a pick directly from Blake. He’s happy singing a rock song and all of the coaches love that he’s so true to himself and super consistent.

Adam’s team represents with Amanda Brown – arguably one of the best of the best this season. She starts out with “Natural Woman.” Adam is super excited about the pick during rehearsal. She does so well on stage that CeeLo takes the time to launch into a long appreciation for women of all shapes and sizes. Her second song is the rocker song “Here I Go Again.” I love that Amanda can walk the line between overdoing a power ballad and mixing it up with something unexpected like Whitesnake. She’s my favorite to win. Sorry, Trevin.

Melanie also represents for Team Levine by singing CeeLo’s “Crazy.” I always get nervous when a contestant sings a song by one of the coaches because you know they’re extra judgey about it. She obviously does her indie thing and Adam admits that there were pitch issues, even though he loved the overall performance. Her second song is “The Show,” which was basically written just for Melanie’s voice. Blake loves that she finally did something a little lighter and younger after all of her mopey dark stuff from week’s past. Christina says “You sang it really good,” prompting everyone’s grammar alarms to sound simultaneously. It’s, well, Christina. Well.

After a few duets during the results show – Cassadee and Amana sing “Breakaway” and Trevin and Terry sing “Feel Again.” But when it’s time to announce who’s advancing, the fun and games are over.

The first singer to make it through is Terry, who occupied both the first and second spot on the Billboard Rock chart this week. The next one through? Trevin Hunte, obviously! Cassadee Pop gets the third spot of the night and both of Blake’s singers are safe. I’m stressed about who gets the last spot though – both Nicholas and Amanda deserve to stick around. After some more silliness – the coaches all do impressions of each other to waste some air time – it’s Nicholas who makes it through to the final four. No, Amanda was my girl! Luckily, I think she’ll do just fine on her own.

We’ll have to wait till next week to uncover all of “The Voice’s” mysteries, like who will make it to the last show? Will Trevin reign supreme? Will Xina learn how to use adjectives properly? Only time will tell.

Tiffany writes on behalf of CableTV.com. She typically writes about television and entertainment. When she’s not writing or watching reality TV, she’s an avid dancer. You can follow her on Twitter @CableTV.