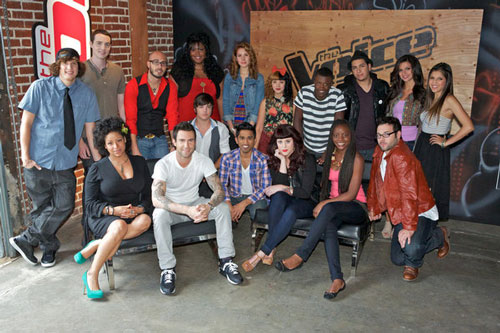 Thank goodness we're finally done with the auditions. Now, it's time to get down to the nitty gritty with the battle rounds and yes, finally a wardrobe change. Hallelujah, I have something to comment on other than the singers! The addition of the various mentors is another thing to get excited about, especially since Michael Buble, Mary J. Blige, Billie Joe Armstrong and Rob Thomas are hitting the show this time around.

Cheesy wrestling ring aside, the Battle rounds are pretty serious. But they’ll be more exciting this season with the addition of the "steal" feature, where an ousted singer can be poached by another coach.

With Michael Buble on their side, pairing country singer Casey against Terry, the Scottish rocker in the first battle round. They both meet with Blake and Buble to practice their song, "Carry On, Wayward Son," which Blake hopes will weed out the weakest singer. Almost as awesome as their rehearsal is the wicked-cool piano player that has award-winning facial hair. But I digress – after both singers have a heart-to-heart with their coach and mentor, they take the stage. Terry is clearly the comfortable rocker while Casey hoe-downs the Kansas classic. After the song ends, Blake chooses Terry as the winner, despite not being a country singer.

Next up, Adam's boys Bryan and Collin face off with the help of Mary J. Blige. They both wig out for a while and then get to work. Adam challenges them to sing the song "Santeria" by Sublime, which has a ska vibe. Collin thinks it's more Bryan's style, but is willing to give it the old college try. Mary tells them to sing with more emotion, which is an important tip from the singer of "No More Drama." After the typical pep talk, the singers head to the ring and belt out the ska staple, both putting out a solid effort (even though I liked Collin better). Adam weighs his options and puts Bryan through to the Knockout Round. Luckily, both CeeLo and Blake make a move to steal Collin, and he chooses Team Blake.

CeeLo's first pairing between Diego and JR proved to be interesting; they don't sing the same type of music. Of course, that's to be expected, seeing as CeeLo tends to choose an eclectic group of artists for his team. He's working with Rob Thomas, who coaches the two while singing "Jesse's Girl." Peruvian-born Diego has barely heard the song in English, let alone sung it before. Diego struggles through rehearsal, prompting both coach and mentor to wonder if he's all that serious. In the ring, JR does the lame "go for a handshake and then swipe his hair" thing and it makes me wish he was disqualified immediately. After the performance, CeeLo chooses Diego to go through. Ha, that's what you get for doing a psych handshake; what is this, 1993?

Christina wears a weird turban while she sets up a battle between Nelly's Echo and De'Borah, both singing "Message in a Bottle." Billy Joe Armstrong ends up coaching De'Borah to the win. Other parings of the night include 2Steel Girls versus yodeler Gracia singing "Sin Wagon": Gracia comes out on top. When it's Team CeeLo's turn, Amanda closes out the show by battling Trevin by singing "Vision of Love." It's absolutely no surprise when CeeLo takes Trevin, causing all three other judges to move for the steal. Amanda goes with her gut and lands herself on Team Adam.

Kicking off the second night of the Battle premiere, Cody matches up against the obscenely annoying Domo for team CeeLo. CeeLo intros the singers to Rob Thomas along with their song, "Telephone." It could not be more suited to Domo, considering Cody is actually a country/blues singer. Still, he's willing to take on the challenge of becoming a total package type of singer. Domo starts by letting everyone know she's basically planned the entire performance already; um, CeeLo and Rob, I guess you can go home. When the singers hit the stage, neither one really nails the song. Still, one has to go through and CeeLo sends Cody through to the Knockout Round.

Team Christina's matchup between Aquile and Nathalie proves to be solid, especially since I don't hate either one of the singers. They both meet up with XTina and Billie Joe Armstrong to get their song assignment: "You Give Me Something." Despite the unlikely pairing between soul and country, the actual Battle performance is gorgeous and smooth as silk. XTina puts Aquile through, leaving 15-year-old Nathalie to pack her bags.

Caitlyn and Melanie are up next, which makes sense because they're both super-quirky singers from Adam's team. Mary J. Blige helps mentor the girls through a rehearsal of "Lights," which works well for both singers. They're urged them to try and make it their own, so it's no surprise when their performance nails the track despite issues during their rehearsals. Adam chooses Melanie, leading Caitlyn to be stolen by CeeLo.

After a week of Battle rounds, it's clear that the coaches aren't messing around: They're creating perfect pairings with thoughtful song choices to weed out their singers. To be honest, I'm just glad they’re getting rid of the annoying characters to make room for the serious artists. The system works!

Stephanie writes on behalf of CableTV.com. She typically writes about entertainment and Hollywood. When she’s not writing, she’s an avid hiker. You can follow her on Twitter @CableTV.