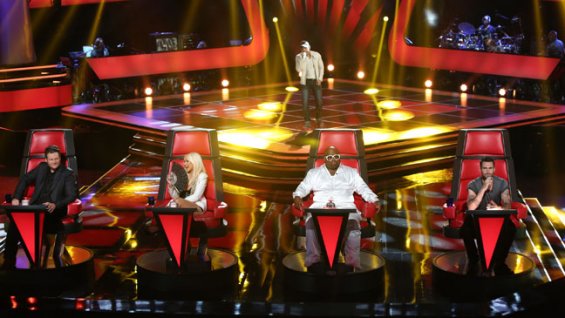 It's the last night for blind auditions, which is great because I feel like we've been watching blind auditions for the last three months instead of four weeks. All of the coaches only have a few spots left on their teams, which means they're going to be choosier with the so-so singers and a lot more cutthroat with the really good ones. And that just makes for really good TV.

The show kicks off with Natalie, who is a 15 and has performed a little in her hometown. Carson makes the mistake of referring to "The Voice" as the "biggest competition in the whole world" which I feel like might be a bit of a stretch. No matter; Natalie heads onstage and sings "White Horse," getting Blake and Christina to turn around within the first three seconds. Adam hits his button near the end, making it a three-way battle for the young 'un. After some serious sweet talk, she lands herself on Team XTina.

Rico Suave – I mean, Rod Michael – is an ex-boy band member in Europe. He mourns the loss of his fame when he moved back to the States after his boy band folded. He's hoping to score some success in front of the coaches, but the last ex-boybander didn't fare so well. When he sings "Please Don't Go," the coaches look like they're thinking more along the lines of "Please Leave and Never Come Back." He doesn't make it through. Note to all boy band members: Don't go on "The Voice."

One of the standouts of the night is Nicole Johnson, who has her hopes and dreams pegged on Nashvlle. With her yellow dress and cowboy boots, she seems like a match made in country heaven for Blake, who is still hurting for singers, especially after having a singer poached by Adam. She sings "Mr. Know it All" with a country vibe and is scoped by CeeLo and Blake, landing herself on Blake's team, of course.

Backup singer Chevonne works for Lady Gaga and she clearly worships her boss. She wants to strike it big out on her own; no word on how Mother Monster feels about losing one of her singers to a solo career. She sings "Brass in Pocket" and gets CeeLo and Blake to turn at the last possible second. She goes with CeeLo after they have a heart-to-heart.

With each coach only having one spot left, it's a fight to the death (OK, not really… but how awesome would that be?) so the heat is on for the last batch of singers. The first coach to round out a team of 16 singers is Adam: He scoops up Kayla after she sings "American Boy" and gets XTina, CeeLo and Adam to all turn around.

Who is next to fill up a team? It's Christina who gets the bragging rights by winning over teen queen Celica, leaving Blake ticked off.

Finally, it's down to CeeLo and Blake battling for the last two singers to score a spot on the show. They dismiss a steady stream of singers, including Jessica Cayne, who comes along and belts out "Good Girl" to no avail. Christina gives her the old "it's all about having fun" line. Yes, being rejected on national TV is gobs of fun.

It seems pretty bleak until an aging Ozzy Osbourne lookalike cranks out a country version of "Every Breath You Take." After Blake and CeeLo duke it out for a while, he chooses Blake for his country roots. CeeLo doesn't fill out his team until he meets Cody Belew, who believes he was an elderly black lady in a past life. He is 100 percent gunning for team CeeLo, so it's kind of perfect that CeeLo pushes his button at the last minute and they start a long and happy relationship together.

With the blind auditions finally coming to a close, it's time to get down to the nitty gritty: Battle Rounds. The singers go head-to-head in the ring to see who comes up as the winner for a spot on their coaches' teams, plus the implementation of the "steal" button. Even more exciting? A wardrobe change for the judges!

Stephanie writes on behalf of CableTV.com. She typically writes about entertainment and Hollywood. When she’s not writing, she’s an avid hiker. You can follow her on Twitter @CableTV.

4 thoughts on “The Voice Week 4 Recap”