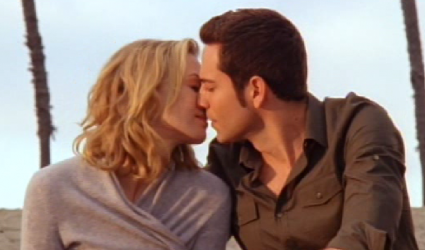 Chuck vs The Goodbye I have watched this show since day one. It’s about the only show that my husband and I actually watch together.  I hate goodbyes even on TV shows. Over the years Chuck has had threats of cancellations but fans have fought the good fight and won to bring it back. Thanks Subway!

This time was no joke and fans couldn’t fight this one. Chuck has finally ended and we are not on candid camera. This was an amazing finale one that all Chuck fans deserved. With a heavy heart I bid adieu to Chuck

***SPOILER ALERT*** If you haven’t seen the show

I was sad that Sarah lost her memory. There is no way with only one 2-hour episode left could there wrap up getting her memory back and say goodbye. The first half was Chuck vs Sarah where Sarah was told that Chuck had killed her partner.  With her memory wiped it was easy to take on the mission to kill Chuck and to get ahold of the intersect glasses. She shows back up and plays her “role” with Quinn in here ear. She finds the glasses but Chuck out smarts her and found then in her bag. She does a quick switch-a-roo with a pair of sunglasses. When Sarah find that out she take Ellie hostage and demands he brings the glass. Ellie runs her car into another car and Chuck take her to their dream house to see it will trigger her memory.  Which Chuck was recounting their live and pleadging his love, she makes the statement “I am sorry I did my job so well, I need those glasses” Then she proceeds to try to kill him.   Thankfully, that didn’t happen and Quinn admitted to using her. This is a game changer for her.

Chuck vs The Goodbye

I had a feeling weeks ago this would happen, The intersect would leave the show the same way it was introduced, through Chuck. In order to save Beckman and a room full of people, Chuck had no choice but to out on the glasses do the intersect could help him defuse the bomb. Oh wait, let me back up to the highlight of the show, Jeffster. That is right Chuck fans, Jeffster appeared and saved the day, so to speak. See the bomb was set to go off when the orchestra stopped playing but Chuck needed time to get the glasses. So Jeff and Lester were called to play Take Me On and let me tell you this song has never lasted so long.  In the end Beckman was saved and Take Me On ended.

Me vs The Tears

So now what?  Here is where I shed some tears. As Casey, Sarah, and Chuck are in castle saying their last goodbyes. Casey has soften over these last five years and gave Chuck a huge goodbye. Sarah walks out to find herself.  Ellie and Devon are off to restart their lives in Chicago with new hospital job. Morgan and Alex are moving in together.  Jeff and Lester, believe it or not, get offered a record deal from a German record company that heard them play while saving the day. Casey gives the keys to Morgan and Alex and off to Miami to find his love Gertrude.

So what about Chuck and Sarah? Morgan asks Chuck where in the world would Sarah be. The beach of course. This is where Sarah told Chuck to trust her and everything would be okay.  So he asks her to do the same.  She asks him to tell her their story.  We see 5 years worth of clips. (boy has Zachary Levi changed) The final words of the show are “Kiss me”

The mention of Chuck being the intersect again is never mentioned, which was kinda odd. I am left with hope that Chuck and Sarah will live on and make beautiful babies.  I also think Casey and Gertrude will be shooting it up after the bad guys.  Man I am going to miss this show, and I bet Subway will miss it too! Thanks for five great years of TV Fake Empire. I hope you can create another show just as stellar as you did with Chuck!

One thought on “Chuck vs The Goodbye”