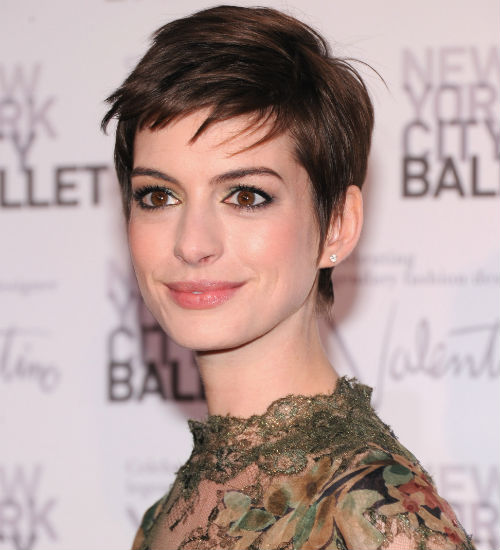 Anne Hathaway is still not considered fully-fledged Hollywood nobility and that is completely criminal. A talented actress on stage Hathaway broke into cinema at an early age as the teenage princess from The Princess Diaries. Now, more than a decade later she is a favorite in the running for a Supporting Actress Oscar, has just received the equivalent Golden Globe and has starred in one of the biggest superhero spectaculars of 2012, rounding off legendary filmmaker Christopher Nolan’s Batman Trilogy as Catwoman.

It started in television, as the daughter in Get Real, though she made her big screen debut just a couple of years later playing Mia Thermopolis in The Princess Diaries. For the next few years she was more or less typecast as a girl’s girl, a female icon for young girls but that image was soon shattered when she took on more challenging roles in movies like Havoc or Brokeback Mountain, a movie in which she appeared topless. Her first major role that transitioned her from typecasting was playing lead opposite Meryl Streep in The Devil Wears Prada, a film aimed at a more mature female audience though still appealing to younger girls as well.

Anne Hathaway alternated between strictly dramatic roles, like playing Jane Austen in a romanticized version of her early years and playing straight(wo)man to Steve Carell’s incompetent secret agent antics in Get Smart!. One of her best performances of the decade was, however, in Rachel Getting Married where she played the recovering addict sister of title character Rachel in a fantastically challenging movie about family relations. The performance as the lead character, Kym earned Hathaway her first Oscar nomination and is well worth watching (freely available on-demand as part of many Charter Internet Specials).

Hathaway continued to alternate between dramatic and comedic roles and even took a role in the Tim Burton spectacular Alice in Wonderland as the White Queen, opposed to Helena Bonham-Carter’s Red Queen. She was also the main romantic lead in Love and Other Drugs where she played a woman suffering from Parkinson’s who falls for a pharmaceutical sales rep. After Hoodwinked back in her early days Hathaway took another role in an animated feature, a supporting role in the star-studded Rio.

Anne Hathaway career hasn’t as of yet peaked. She still gets regular roles as a supporting actress and occasional leads in smaller films but her brilliant performances are slowly propelling her to super-stardom. The future looks bright and we can safely say that after playing a princess and a queen, Hathaway is now true Hollywood royalty.

One thought on “TV Nook Hook Up: Anne Hathaway”