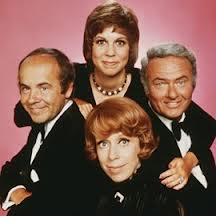 Top 10 US Comedy Series of All Time Comedies have always scored high in American TV watching habits. No doubt that is the reason why we see so many of them being produced from time immemorial. Though many are classified as comedy, not all actually qualify to be one. What is top is always a subjective issue, though there may be a clue to it in the money it grosses up by way of advertisements, but when we are talking about a top 10 list, it is neigh impossible to use that as a determining factor either. My sincere apologies to you if you don’t find your favorite comedy series listed here. Likewise don’t be unduly concerned if you don’t see them listed in a particular order, because it is not my intention to rank them.

Married with Children was aired during the period 1987 and 1997 and belongs to the comedy genre. The creators of the series are Ron Leavitt and Michael G Moye. The cast includes – Ed O’Neill, Katey Sagal, and Christina Applegate in the lead role. The plot is about a white American Family. Al Bundy plays father, who is a shoe salesman. He has a lazy woman for wife and two kids – a son grossly obsessed with women and a dim-witted daughter who is also promiscuous. The series was nominated for 7 Golden Globes Award. Most of the filming was done at ABC Television Centre, Los Angeles and California.

The Golden Girls was aired in between 1985 and 1992 and belongs to the comedy genre. The creator of the series is Susan Harris. She was born in the year 1940 in Mount Vernon, New York, USA. Her series are most remembered for imparting wisdom through her stories, and The Golden Girls is no exception to that rule. One of her series won Primetime Emmy Award. Casts in the series include Bea Arthur, Betty White and Rue McClanahan in the lead. The storyline has four women staying together and enjoying life during hard times.

The series was shown during the year 1967 and the plot features skits by Carol Burnett and her group consisting of Vicky Lawrence, Lyle Waggoner and Harvey Korman, and others. Carol was also a great singer during her times. She is also known as the Queen of Television Comedy. She was born in April 1933 in San Antonio, Texas, USA. Her series have won 5 Golden Globes. She also produced The Secret world of Arrietty.

‘Mad about you’ is light in comedy and features Paul and Jaime Buchman. Buchman plays a recently-wedded man living in New York City. The storyline brings out the subtlety and gentle humor associated with day to day living in a city like New York. The directors of the series are Linda Day and Gordon Hunt. The series was shown in 1992 and was a big hit. Casts include Paul Reiser, Helen Hunt and John Pankow playing lead roles. Linda Day lived between 1938 and 2009 and was nominated for Primetime Emmy. Gordon Hunt was born in the year 1929 and is the older brother of Peter H. Hunt.

Home Improvement is a narration about try times of Tim Taylor, who is raising three boys of the most mischievous kind with help from a local host, his wife and neighbor who is nothing but all genius. The series was directed by Andy Morris and aired in1991as a series. Others who play lead roles include Taran Noah Smith, Earl Hindman, Patricia Richardson and Tim Allen.

The Fresh Prince of Bel-Air

This series was aired in 1990 and the plot is about a respectable family located in California bring in Will Smith and grooming him to become respectable. Things however go differently though with the street smart Smith who has other ideas up his sleeve. The lead role goes to Will Smith who is the wayward teenager. Others in the cast are Alfonso Ribeiro, Karyn Parsons and James Avery. Smith was born as Willard Christopher Smith Jr. in 1968 in Philadelphia, USA. He has been nominated for 2 Oscars.

The series was aired in 1974 and the plot is about the captain of a city police station and his staff there. Highly dramatized, Barney is full of hilarious moments. You will see the lighter moments in the building housing the police station for most time. Cast includes Abe Vigaoda, Gregory Sierra, Hal Linden and Steve Landesbearg in the lead role.

All in the Family

This series was aired in 1971 and is about a working class who is always seen squabbling with everyone in his family over important issues of the day. Each episode runs 30 minutes, and starring in the lead are Carroll O’Connor, Rob Reiner, Jean Stapleton and Sally. The series won 8 Golden Globes. The series also has to its credit 31 other wins and 61 nominations. Most of the filming took place at Metro Media Square in Hollywood.

Saturday Night Live was first aired in 1975 in a series. Each series runs for 90 minutes. It was directed by Mike DeaSeve and Christopher Guest. The creator of the series is Lorne Michaels, and the star cast includes Lenny Pickett, Darrel Hammond and Don Pardo playing the lead roles. The series was aired late night. Notably many of those who acted in the series made comedy serials themselves latter. The series has several unforgettable quotes, mostly hilarious and rib tickling.

This series was aired in 1996 and has lots of political twist to it. The main characters to note are Charlie, who plays Deputy-Mayor of New York City. Most of the play is about saving the Mayor from embarrassing moments, and more importantly the media. The main cast is Michael J Fox, Richard Kind, Heather Locklear, and Charlie Sheen. Filming was mostly done at CBS Studio Center in California. Each episode runs for 30 minutes and sound is by Dolby Digital. If you like this series, then you may watch Two and a Half Men as well.

This is a guest post by Sharon Thomas of www.thecornersuite.com, a site that offers savings and current information on dish network internet, as well as dish.com services.

One thought on “Top 10 US Comedy Series of All Time”