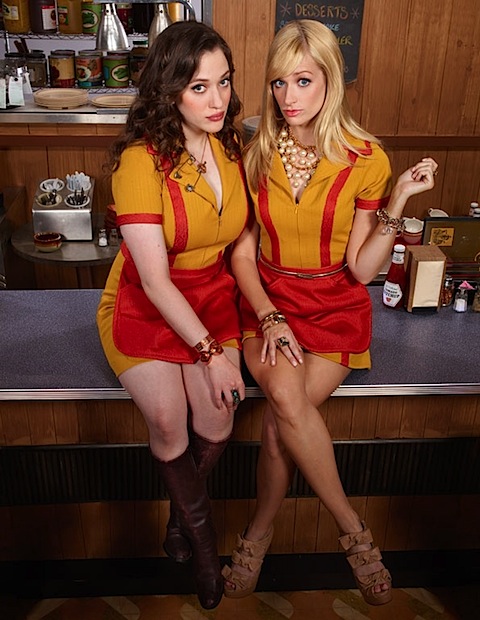 From the incredibly talented writers of Will & Grace  we are now able to enjoy 30 minutes a week of the most realistic and hilarious comedy found in the last few seasons: Two Broke Girls  comes along to give us something fresh and witty to laugh about. The first season of the show debuted on CBS on September, 2011, on the schedule right after Two and a Half Men,  and has since gain so many followers and fans it is hard not to care about these sassy young ladies. The success has grown so steadily that show won Favorite New TV Comedy at the 38th People's Choice Awards.

If you haven’t watched this show yet, you need to start doing so right now. In the meantime, these are the main things that have happened so far:

Han Lee hired Caroline as a waitress for the diner under the impression she was an upscale and very experienced waitress from Manhattan, the only thing true on her resume is that she was from Manhattan. Max feels sorry for her and invites her to stay in her apartment, since none of Caroline’s friend will help her after her father was arrested. The two become friends and Caroline brings her horse pet Chestnut to live with them in the crappy Brooklyn apartment where Max lives.

Max teaches Caroline to live like “a poor person” from Brooklyn and teaches her how to get by: shopping at thrift stores, working more than one job and getting away from credit card bill collectors. Caroline helps Max with her cupcake business and designs a plan for the both of them to become successful with it.

On every episode they go through several hilarious adventures on their quest to, not only get by, but to reach their goal of having a successful business.

The cast of Two Broke Girls was definitely not chosen through a random slot machine game . The chemistry among all characters can be almost physically felt and it shows that there was a lot of thought and analysis while putting it all together:

Both Max and Caroline decide to work together towards one goal: gather $250 000 dollars to start their own cupcake business. On every episode we see them trying to save money for their business, and go by on their days as what they call “poor people from Brooklyn”. At the end of each episode we can see how much money they have made or spend.

The rest of the cast is fun loving and quite entertaining:

The show has only gone for one season so far, so you still have time to catch up. The reception has been extremely good and well, although some critics may tell you that the characters are somehow portrayed in a racist or even classist way, the truth of the matter is that people always will be offended by reality. We can certainly expect more from these two hardworking and struggling ladies. Check out your local TV Guide for airing schedules, and check out this lovely and realistic new sitcom for yourself.