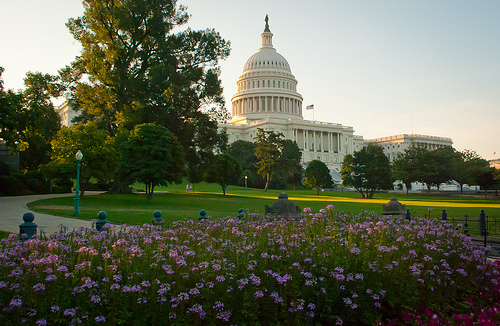 Washington D.C. I the one place that gave me the WOW factor. I can’t wait to take my son there when he is a little older. This guest posts highlights some really great must see landmarks~Karla

Washington is regarded as America’s most prolific city, with its landmarks acting as the country’s most famous icons. From the Lincoln Memorial to the White House, Washington’s greatest landmarks have been featured in all forms of media, from famous books and world renowned television shows to blockbuster films that light up the silver screen.

However, with so much to choose from it can be hard to know exactly where to begin your Washington adventure, as such We’ve compiled a list of the Top 5 Washington Landmarks to make sure you don’t miss any of the city’s great sights during your holiday to America.

Built to honor the 16th President of the United States, Abraham Lincoln, the Lincoln Memorial stands proud on the National Mall. The exterior of the memorial emulates a classic Greek temple design and is constructed of Yule marble from Colorado, whilst the statue of Lincoln itself stands at a staggering 74 feet long, and 60 feet high. A piece of trivia that always surprises spectators is the misspelling of the word ‘future’ in the memorial’s south chamber.

The Jefferson Memorial was built to honor Thomas Jefferson, the third President of the United States and an American Founding Father. Designed by the architect John Russell, the neoclassical building houses a statue of Thomas Jefferson, along with excerpts from the Declaration of Independence. The memorial is located in West Potomac Park and is particularly beautiful when the Japanese cherry trees are in blossom. It was constructed in 1938 and completed in 1943, with the statue of Jefferson added in 1947.

An incredibly emotional and moving landmark, the National World War II Memorial was constructed to honor the memory of American soldiers who fought in the war. The memorial celebrates the soldiers’ memory with multiple statues and engraved lists of soldiers’ names. There is also a beautiful water fountain which stands proudly in the center of the memorial. Visitors can pay their respects to soldiers and veterans alike by visiting the war memorial.

The U.S. Capitol is the meeting place of the United States of Congress, making it one of the most important buildings in America. Construction of the U.S. Capitol Visitor Center began in 2000 was completed in 2008, and is located below ground the main building. The Visitor Center is filled with interesting and unique exhibition halls, detailing the history of America without belittling or boring its audience. There are also two gift shops and a cafeteria for visitors to enjoy.

Amy Labbadia is an experienced global traveler who has visited over 100 countries. Amy currently writes for Wanderforth, a tour operator specializing in holidays to Washington

One thought on “Family Vacation to Washington D.C- Must See Landmarks”