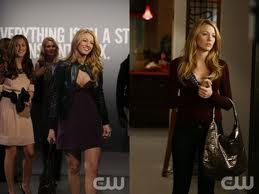 Commercial Fashion: Who Influences Who? Trying to figure out if fashion influences TV or TV influences fashion looks cut-and-dried. TV has a massive effect on commercial fashion (what the public wears), and no effect on artistic fashion design. Artistic fashion design involves the fashion that is fused with art and thrown down the catwalk on a hungry-looking model. The fashion industry is influenced by this art, but is not controlled by it. The fashion industry dictates what is in the stores, and the shops decide whether they desire brand recognition, trends, quality or economy to be their main selling point. All of these aspects filter down into what people wear in the real world, aka, commercial fashion.

Examples of How The TV Affected Commercial Fashion

Daisy Duke from the Dukes of Hazard turned denim shorts into a must-have for all tight-bottomed women in the early 1980s. Until that show came out, the shorts were known as unfashionable denim cutoffs. The Tudors TV show affected nightclub wear in 2008 (somehow), where women swapped low-cut, see-through tops for tight low-cut, strapless dresses (short dresses). The Tudors TV show even affected artistic fashion by influencing the catwalk pieces by Jill Stuart, Carlos Miele and Reem Acra (2008).

The TV show ROME inspired a soft flowing style that was first adopted by catalog clothing sellers, but was later adopted by main street clothing stores. Buffy the Vampire Slayer (2001) influenced the fashion of women across America, as Sarah Michelle Gellar showed that young women do not have to dress sexy for people to take notice. Her simple style of beige and black trousers and a sensible blouse worked well, even when she was playing a teen in a high school. The designer (Cynthia Bergstrom) dressed Buffy in Miu Miu, D&G and Sportmax and started the sexy but sensible trend that can still be seen on women who are now in their thirties and forties.

There are very few good examples of this, probably because as soon as a street fashion catches on it is splashed across the TV and media. One plausible example is in gangster fashion. In the ’90s and ’00s, the rap industry was dominated by black performers who adopted a radically different fashion style to the brightly dressed black fashion of the 1980s. Lawbreakers, rappers and bad boys started wearing all black, with leather coats and gold chains. This style however was quickly thrown into the media, to the point where black rap moved away from colorful Will Smith dancing and rapping to dark colors and violent themes.

Adam Gilligan is a life coach who also loves television. He blogs on a variety of lifestyle topics. Call 1-888-662-2761 if you’re looking to lower your monthly cable bill.