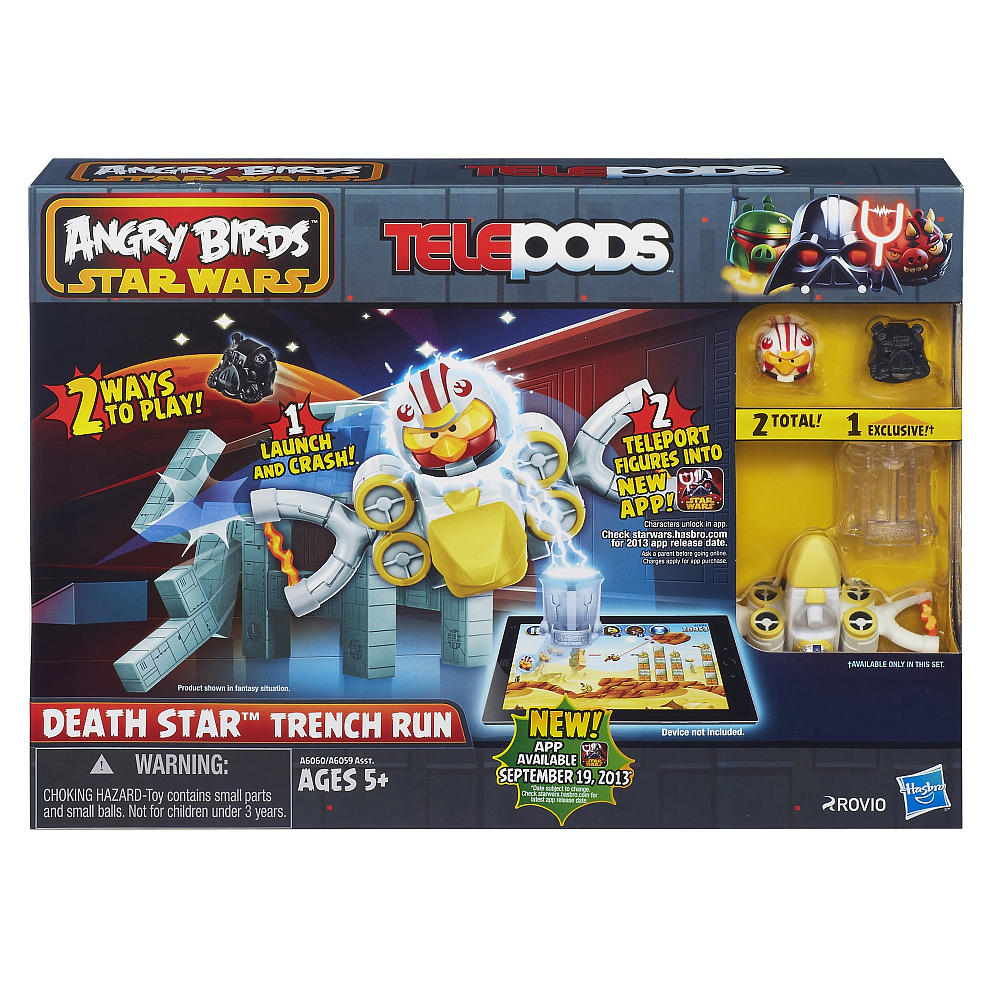 Cooper is in love with Angry Birds. So much so we just got 2 PJ sets with them on it.  He can play it all day long and he is better than I am and he is only 6! So when I had the chance to review Angry Bird Star Wars Telepod I had to grab it up.

This is another great game by HABRO and of course would make an excellent Christmas gift.  Now keep in mine, with this game the characters you get in the game can be teleported into the game but you must have an Android or ipad device in order of this to work. Cooper normally plays his game on his Kindle so we were a bit disappointed it didn’t work on that but Daddy’s android tablet came to the rescue.

The Angry Birds app comes to life! This line of Hasbro toys captures all the launching and destroying fun of the app in physical form and features your favorite Star Wars characters re-imagined as high-flying Angry Birds and villainous pigs! You can stack, launch and destroy the Death Star with the blocks, figures and launcher in the Death Star Trench Run set. Put your Luke Skywalker Bird figure in the X-Wing Starfighter launcher and pull it back on the ramp to launch it at the cannon turret on the blocks. Can you topple your exclusive TIE Fighter Pilot Pig figure? It’s easy to take the game to your mobile device (sold separately) and unlock your figures in the app! Just download the app and then put the Telepods base and any of your figures on your device. Once you’ve scanned your figures into the app, you can unlock those characters! Destroy the Empire with the Death Star Trench Run Set!

Well needless to say that Cooper loved this. He thought it was so cool how what was in front of him appeared in the game. We do wish there was a way these could be played on his Kindle because Daddy didn’t like the idea of Cooper playing with his tablet. Regardless, Cooper was excited to play something new. In this game there was no sling shot but a really cool X-wing fighter that can knock down the blocks. This set also came with 2 Angry Birds that with the code at the bottom of the bird teleports in to the game app.  Which will fascinate any child with a “how did they do that look”.

If you have a young child you need to buy a gift for, and they can use it with an android or ipad app, then this is the game to get them. Hours of fun are to be had.

Summer is Here! Treat Your Feet Right with Mephisto